NORBLAST S.R.L.: Who we are and what we do. Passion, determination and a good dose of intuition. These are the qualities that have allowed Sir Norelli to revolutionise a whole sector, transforming the existing products into a totally innovative offer: a brand that has made excellence and professionalism its values. In 1976, after years of experience and knowledge of the mechanics world, Sir Norelli established Norblast with the aim of designing and manufacturing machines for mould cleaning. A path made of choices and experimentations begins, ant it will lead the company to evolve until becoming a Leader in the industry of surface treatment. Both in Italy and worldwide. Over the years, in fact, the collaboration with research centres and universities has allowed Norblast to widen its skills and explore industries that had not been foreseen at the time of its founding: machines designed for the cleaning of moulds, machines for perfecting aviation components, systems for processing glass and steel, sophisticated industrial lines to help make biomedical components increasingly safe and modern. In the 90s, the Group consolidated its partnership with the world of scientific, technical and medical research, founding Peen Service which in a short time became a separate division with relationships extending to the borders of the Spanish market after the founding of the Ipar Blast subsidiary. Today Norblast is a sound and structured reality, a company aware of its merits and successes: the transformation of sandblasting and shot peening processes into real technology. The Research and Development Centre and the Special Machines Division are its departments of excellence, specialised divisions that allow to meet customer requests every day, in a complete and innovative way. 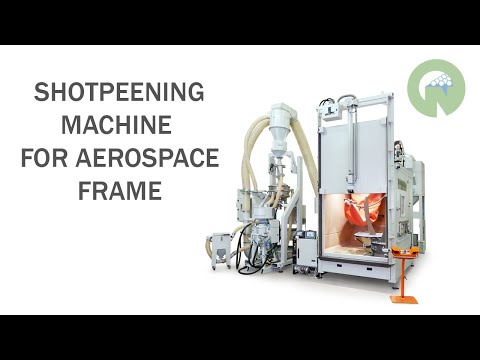 Norblast - Shotpeening Machine for Aerospace Frame
THE ROLE OF PERFORMANCE Aviation is a continuous challenge. Component materials and processes must g